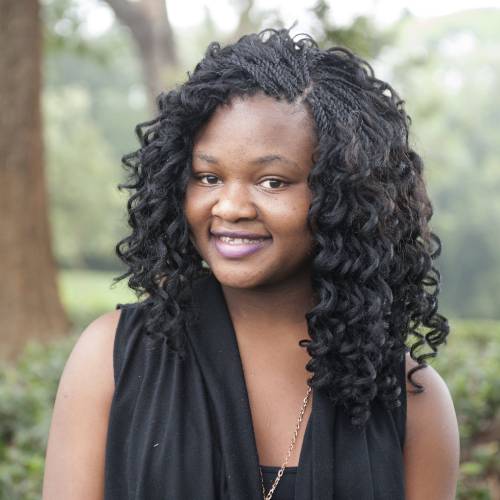 The Story of Wongani Jambo

Satemwa is one of the communities where the majority of people do not go further with education, most of them resolve to early and unplanned marriages. As a result development activities are very poor. This community needs more educated people who are ready to think outside the box and have that innovative spirit that can lead to new developments.

Wongani graduated with Credit from Chancellor College in October 2019. She is already a role model in her community, encouraging her fellow young women to continue their education. It is thanks to Wongani’s mentorship and encouragement that so many women were determined to begin tertiary education in 2019.

I would like to express my sincere gratitude to Rare Charity donors for offering me the scholarship. It was a life changing opportunity.

I have had a smooth sailing throughout the course of my undergraduate studies, an opportunity I never took for granted, as tertiary education is really expensive in Malawi. The high costs at private universities and the constant fee hikes at public universities make it very hard for most average Malawians to attain tertiary education. Thus, I sincerely thank Rare Charity for the financial support rendered to me throughout my studies.

I would further like to encourage Rare Charity to continue offering scholarships to young people in Satemwa, especially young women. Being a remote area, most young people fail to go to universities even when they have been admitted. The scholarship will particularly be of paramount importance to young women, as the majority of young women in the area resolve to early marriages.

Girls who will be on the scholarship programme will also serve as role models to their fellows, thus, encouraging more girls to continue with their studies up to tertiary level and even inspiring some who gave up to go back to school.

George Eliot said, “it is never too late to be what you might have been”, and I strongly believe that, with Rare Charity Scholarship, a lot of young people here in Satemwa can finally realise their dreams.