Satemwa is a third generation family-owned tea and coffee garden in the Shire Highlands of Malawi. For nearly 100 years the Kay Family has been crafting superior teas and coffees, which are exported around the world. Built in 1937, the Satemwa tea factory is known around the tea world as a producer of quality tea. The Garden was named as one of 2019's 'Companies to Inspire Africa' by London Stock Exchange, and is proud to be the first African Tea Garden to employ female managers. The knowledge of the land and consistent passion and care that have been passed down the generations of both the Kay family and employees have led to distinctive and celebrated teas being created at Satemwa, the like of which cannot be matched. But it’s not just the quality of tea that Satemwa invests in. They’ve also built and funded a primary school, clinic and maternity ward, and they offer each household access to hibiscus and lemon verbena nurseries, so that families don’t have to rely on seasonal work, but can produce crops around the year. Rare Charity grew in partnership with Satemwa’s guidance and support. 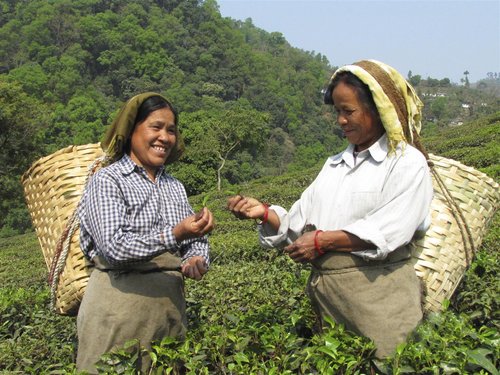 High in the Nepali Himalayas lies the tiny but extraordinarily beautiful Jun Chiyabari Estate. At 1835 meters above sea level, the tea grows slowly but with intense flavours. This very special terroir produces uniquely rich, chocolate flavours. You can see Henrietta’s visit to the farm here. The garden is run by Bachan and Lochan, third-generation Nepali tea planters, whose grandfather came from Britain to plant tea. All the farming is organic, respecting and protecting the rich biodiversity of the land. The garden supports a small community of workers who have lived and worked on the land for many generations. The farm provides valuable jobs for women both in the garden and in the factory where meticulous hand crafting offers highly skilled work. Opportunities for further education here are sparse.

What do we do on partner farms?

We support individuals through education.  They become local role models who can encourage their peers to develop skills and change their own lives and their community’s future.